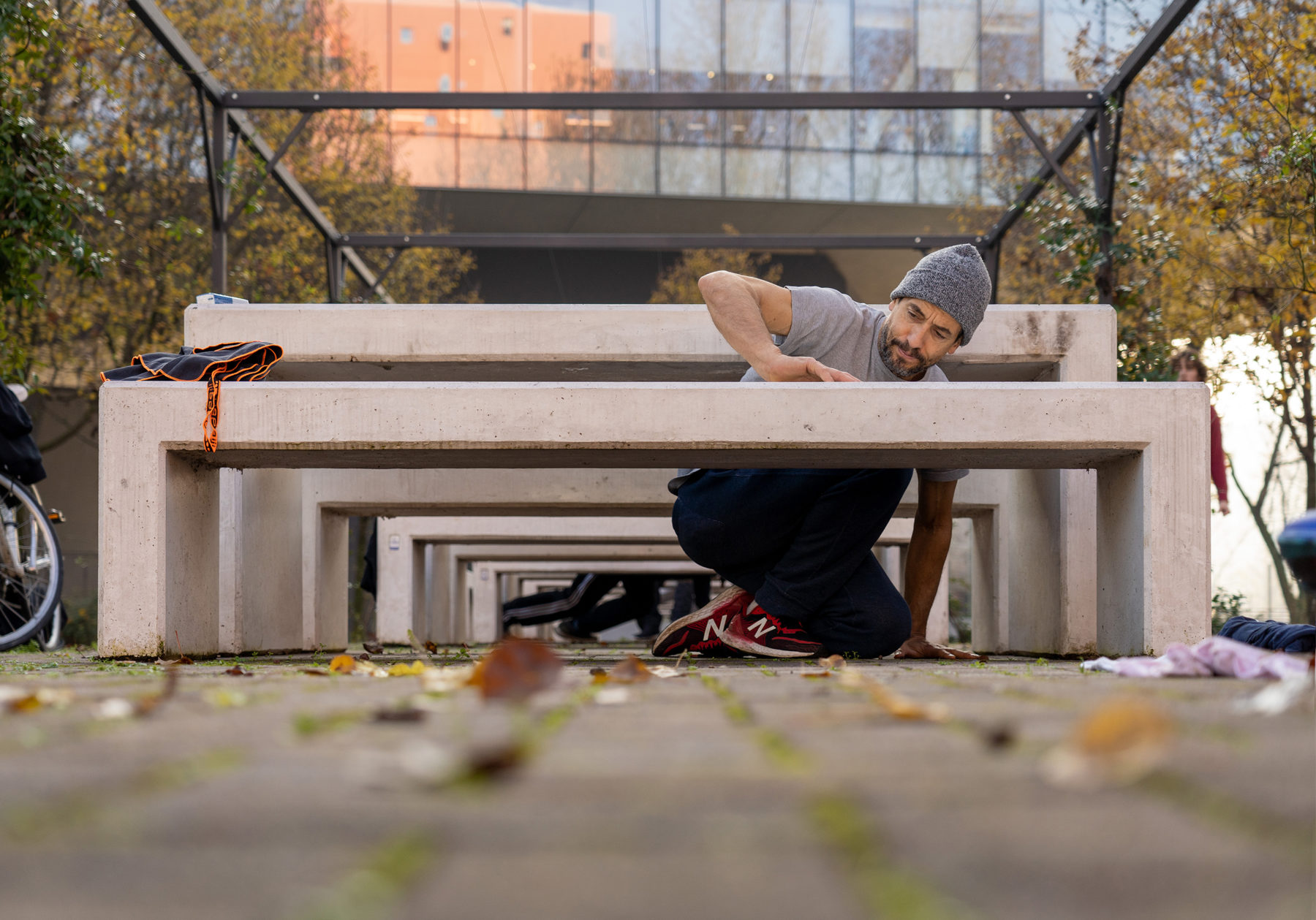 When I say I have discovered a way of transmitting, a pedagogy, I do not pretend I have invented it. And I do not exclude that someone else thought about it before, but I developed it by practicing, hence on myself first. Kind of like a researcher doing tests on a mouse.
I was the mouse.
Ever since I’ve been training, I’ve never written a training schedule, such as to motivate or remind myself what to do. I collected data and information that I stored in my brain. Patiently. I was able to print in my head and in my body the various routines because I had an almost pathological constancy. Then I transmitted them, trying to perpetually improve them. None of these workouts required a specific material, I had to be able to do them anywhere, anytime. It was my fixed nail.
No excuses they say, yeah! Yeah! Find the reason, it is all you need.

Explaining a technique, identifying its details, it is not an unsurmountable thing, just look at a tutorial of Lord Tuto. Or read a science book of scientists.
Making sure that you understood it or that it has been understood: another pair of sleeves.
Even the execution of the so-called technique will not be an easy task. Understanding does not mean being able to reproduce, it means that we understood. Which is already a good start to begin the journey.
As I always say:

The stage of familiarization during the first part of the learning allows you to do it with tranquillity and serenity. There is no obligation of the results at that time. Keeping this mantra in mind allows you to accept moments of frustration during the practice.
A thousand times I hammered that frustration is inevitable when you learn something new. It’s totally normal. Knowing that, remembering it, might help anyone who’s too tough on himself. Then underlining only the frustration alters the state of lucidity since we tend to get irritated, to its paroxysm it leads to anger, at that point we are screwed. The mind becomes stiff and the body naturally follows the tumultuous mood. It then triggers a vicious circle in which you do not cease to record false information, in the lead of all: The inability.

Heavy is the world of image and appearance in which we live, that’s clear. Our right to errors is denied and we struggle to recognize the skills of others. As if we would become less good ourselves, less valid and lose value. The world is full of people who have never really been able to receive “good” or “great” when they acted well, and I wrote it in my *book when I talk about the *psychology of l’Art du Déplacement.
Who fails is a fool, who does not sit on a podium is a loser. Who is different is anomalous.
Having those considerations in mind, I have a particular approach with kids and young people. I fight their propensity to self-distribute “crap” when they fail, because they act by imitation and repeat what they hear. I destroy with calm and coherence the pixelated myths and heroes of the nice weather. I take the time to explain the difference between a MISTAKE and an ANSWER that doesn’t match the demand. Because it starts here, from them, it is never too early. Even with adults, it’s never too late.

It can happen to be a little slow in the application, and it is normal, learning a new technique is a bit like learning a new language: first we think about what to say in our own language, word by word, then we recite once we have all elements of the sentence. So for the technique we think of each element that compose it before rendering it in a single and harmonious piece. The shortest way is to rely on the well-detailed manuals of the procedures to follow and thus satisfy the immediate collector, the ego of the classifications and pieces of paper signed by the president of the universe, recognized and labelled “the very true truth”.
I prefer the slightly longer roads made of research, wanderings and mistakes that incite to create and postpone the connections between head and body.
It promotes openness and interaction with the world just under our feet and at hand, but also with the one who speaks differently.
It’s a challenging, ambitious and infinite journey if all goes well. But we develop a self-critical state of mind, thus autonomy in situations of resistance or confrontation. So as not to ruin, the adaptability grows with creativity. Sustainably.
From practice and repetitions arise automatisms, which means that we are in the process of assimilating.

However after conducting experiments on me, then noting some reactions, I had to check how useful they could be to others. How could I pass on my knowledge and give it a meaning that is beyond my own person, make it understandable and usable. So that the experience is not an end to itself or just a testimony.
I kept the concepts without imprisoning them in immutable patterns. I have made them flexible and adaptable in such a way as to always start from people first.

When I train or train others I seek harmony, not aesthetics. So I respect much more the natural motor identity of a yamak. A certainly more inclusive philosophy because it considers all physical profiles and stories of whoever wants to move. Therefore the access to the movement is wider and democratic.
This particular care for the single one, and not for the mass, naturally brought me to the concept of INDIVIDUAL PERFORMANCE, its recognition by means of specific tools and criteria. Because yeah, we don’t all begin from the same starting line and we don’t all want arrive at the same place. This way we can reach the maximum of someone’s potential, hence optimize the development of the individual.
Although it is obvious, it is fundamental not to lose sight of the great diversity that characterises the human being. To effectively integrate this evidence it is essential to observe and listen to people.

It is important to listen. For real. It is not enough to answer to someone who is afraid :
-Don’t be afraid.
It will be like saying to someone who is in pain :
-Don’t have pain.
-Ok, I feel better now, thank you.
He or she won’t heal like that.

In the case of fear one must first identify what motivates it, then from there rationally dismantle the mechanisms. It’s better not to be too mystical unless you use humour. Every time I dismantle the fear, the blockage, I integrate the person in question into the reasoning, but that’s another story.
Therefore I start from people, not from blind schemes, numbers or methods. Those present in mass transmission that crush the human and prohibit the expression of its various abilities. Because there is no time for it? The will is missing? Content and container do not allow it? Perhaps because it is simply not the mission. I did not study it on books or made up theories that I then experimented to observe its veracity. First I act, I did, and only after I conceptualized, with friends, then alone. I applied, so I was immediately practical. Concrete.
Of course it is not perfect but no method is. I know my approach is not suitable for those who need endless explanations, who have been used to wisely follow the arrows or who wants the destination without the trip. For me the exercise is an information, a key, the more we will have, the more doors we will open.

Sometimes it can become a fairly lengthy process because I have to deconstruct generic schemes and break down false beliefs, often imported by others. After that I can then concentrate on the stage of acquiring certainties. On certainties one develops self-confidence and by extension an objective awareness of one’s own abilities. The role of the coach becomes fundamental, not just to explain the difference between humility and insecurity, or between self-esteem and arrogance… He or she must know how to put his or her ego in the pocket and accept to be an accompanist, a guide. The certainties must not be his/her property but they belong to the trained person.

*Psychology of l’Art du Déplacement: Speaking with Williams I decided to call this way the mental aspect of the practice, because it is more complete and representative of the work we have been doing for years. I’m not sure yet I will let everyone read it, since I think it can be dangerous if put in the wrong hands.

*Book : Soon or late I will publish it…